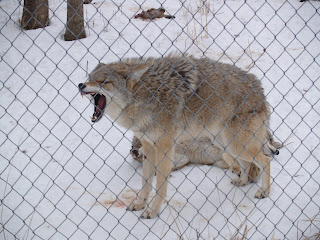 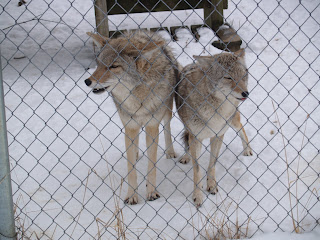 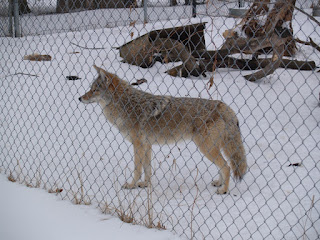 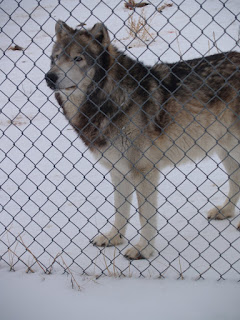 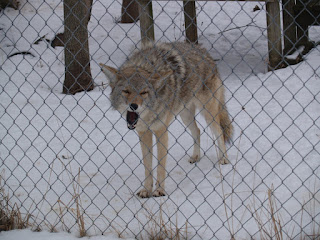 Went to Wolf Park (http://www.wolfpark.org) on Saturday to take a tour and shoot some pictures of the wolves. Wolves are not dogs. The blood frozen on the snow and was impressive.
They also have two coyotes at the park,Twister and Willow. A male and a female from Utah. I was excited about this because I have been thinking about making a piece with coyotes in it. Thinking about a play on a french phrase expressing liminality or twilight. L'heure entre chien et loup literally translates "the time between dog and wolf". I think of a coyote as being between a dog and wolf. Last year when I had to rush to the hospital a coyote stood in the middle of the road on the bridge as I crossed the river. I had to drive around it. I thought it was strange and significant. Since then I have felt a connection to coyotes as a symbol of liminality. The idea of a coyote on a bridge reinforces this idea of being neither here nor there. I plan to use the images as sources for some drawings.
Humans enter the fenced in area with the wolves and they offer photography workshops at the park. But, due to the volatile nature of the coyotes, only experienced staff members visit them. I wanted some images without the fence in front but that was not possible. Maybe I'll think of a solution or run into a coyote in the wild but for now I'll just work on the drawings.
at 9:44 PM No comments: